Lesson of the Fire– Free during 20-24th of July

Yep. Just like the title says, and the big free stamp says, on the cover below. 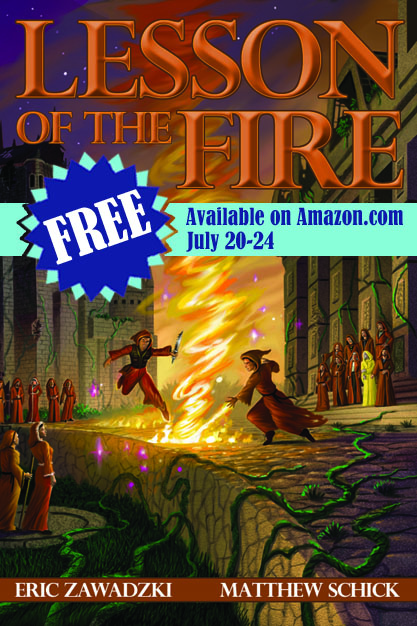 Is that some snazzy cover or what? I actually helped with the beta reading on this one, so I know how much attention to detail and what a magic-rich world the guys have constructed here. It’s their first book, an incredibly in-depth read featuring a enemy that is literally jaw dropping, and I know they’re working on more (I’m actually quite excited by not only this release but their upcoming projects as well). They stop by the site today for a little Q&A about LESSON OF THE FIRE.

Q: What is the book about?

A: It’s really two stories – an epic war story and a personal redemption story. The action follows a violent revolution that turns into a bloody civil war that triggers a massive invasion by an outside force. The nation is a magocracy – a nation ruled by wizards – and we have a lot of fun imagining how battles and military campaigns between huge armies of wizards would look. And then we have even more fun imagining exactly what kind of invasion force would make those armies of wizards shit their pants.

As to the other part, Sven Takraf, the hero, was once an idealistic, peaceful reformer, but he’s completely lost his way. He claims that gods speak to him and have ordered him to do whatever he must to make his political vision come true. In pursuit of this goal he has become as ruthlessly violent as the magocrats he hoped to overthrow, and even his friends are too afraid of him to tell him so. And then a traveling stranger comes to his court and tells stories that may be Sven’s only hope of regaining that part of himself he lost along the way before his transformation into a mad tyrant becomes irreversible. So, a bit of a Fisher King story to go with your Wizards’ War and Peace.

Q: Why is it called Lesson of the Fire?

A: The book uses a lot of fire symbolism and always has – something about all those wizards conjuring fire, hurling fire, and extinguishing fire every couple pages, I guess. Sven is a bit of a Prometheus figure, as well. A wizard who seeks to give non-wizards the ability to use magic even though his fellow wizards want to keep that power for themselves isn’t so different from an immortal who gives mortals fire against the wishes of the other immortals. Finally, several important characters refer to the lesson of the fire, and all of them mean something different by it. Fire can both illuminate and immolate. It makes civilization possible but can also destroy it. Kind of like magic.

Q: Is this book part of a series?

A: Yes and no. The books we write all take place in the same world, but so far all of them happen in different countries with completely different cultures. Our first book, Kingmaker, is set in Turuna – a desert country where children have incredible magic powers that they lose when they become adults. Lesson of the Fire happens in Marrishland – a huge, impoverished nation of wetlands where wizards rule through force and the threat of force, and mundanes (non-wizards) cling desperately to survival. They have no characters in common, although one character in Lesson of the Fire is from a far-off rainforest nation where our next release – Nosamae Ascending – is set.

We’re pretty certain Sven Takraf’s story is over at the end of Lesson of the Fire, but I’m sure we’ll write more books set in Marrishland. We have something like 10,000 years of history to mine for stories, after all, and while some periods aren’t very interesting to us, others are absolutely fascinating to us. That’s still a little ways off, though. We’re getting Nosamae Ascending ready for a late 2012 or early 2013 release, and then we’re doing the sequel to Kingmaker (which we always knew would be a trilogy) the next year. I’m also working on a 4-6 book series I jokingly call How I Destroyed Civilization that might be ready in a few years, but it’s so complicated that I don’t want to release the first book until the last book is done down to the last details of formatting and layout. So yeah, we’re keeping ourselves busy.

Q: What’s your favorite thing about this book?

A: I have to pick just one? Okay, I think what I like most is how it feels like we’re only scratching the surface of this civilization. There’s a lot of stuff about Tolkien and Robert Jordan I can criticize, but one of the things I still admire and respect about their work is you get the feeling that there is a story behind everyone, everything, and everywhere. And I really felt like we nailed that vibe in Lesson of the Fire.

The Mar have cultural icons and archetypes that are so completely different from your usual inns and castles, knights and dragons, swords and magic rings. How is a mapmaker an archetype? Why this obsession with wild rice and boots? When Keith did the beta read, I believe he threatened to string us both up by our own intestines if we mentioned soup one more goddamn time (okay, not really, but he definitely noticed it and politely asked us to tone it down a bit). Everything we write is in part a reaction against conventional fantasy novels, and with Lesson of the Fire, one of our primary targets was conventional fantasy settings.

Q: Where can people get a copy?

Thanks guys and all the best!

Looking back and going forward…